I remember the grass between my toes, I remember that it was so cold that it stung my feet and the concrete scraped at my heels, and I remember how the grass and the dirt would stick with the dew, and I would trail the debris back into the house. I remember 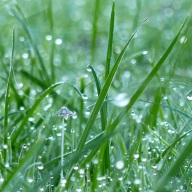 the sound of the cling wrap being pulled back; I remember thinking that the grass from my feet would come off on the sheets. I remember the birds and the smell of coffee and lying flat in the space between their pillows. I remember the feeling of not having enough attention paid to me.

I am still not being paid enough attention.

There is no paper anymore, we stopped having it delivered, and I stopped going to get it years before that. I still lie in the space between their pillows, though now I’m supported by one of the stripy pillows. For the longest time there weren’t any pillows beside theirs, just the place between them. I think it was because they were so used to babies, and babies don’t do pillows.

They still read each other things, even now that the paper is gone, and I don’t go out to get it. They find each other beautiful things on their phones and read them to each other. And they still don’t pay enough attention to me. It’s fun and chatty when you first crawl into bed. But the mornings are for company and recapping what has happened in the world since the 6 ‘o’ clock news.

It has taken me years to accept this.

My roll call teacher doesn’t like me. And that’s okay; I don’t like her either. She thinks I’m arrogant and I know because she told me so.

First day of year eight: she points out everything wrong with my uniform.

Second day of year eight: I am dressed the same and she tells me that I’m arrogant.

I tried to retort with something I thought was clever. It probably solidified her views. But I’m not sure that anyone can be judged for their year eight selves, and my year eight self had just heard the news that what I had hoped would come across as stoic came across as arrogant.

Our relationship has not improved from this point.

Sometimes she’ll walk around the classroom and interrogates us. When we aren’t paying attention she asks, “Are you plugged in?” We’ve figured out that what she means when she says this is “Are you listening to music?” She is mocked for this saying in the quiet whispers of her math classes. And I think she knows it.

I can understand her anxiety on one level, her worry that interaction with our fellow human beings will transfer entirely to our virtual lives, that when she speaks within her classroom their will be no one to listen. She fears our dependence.

But it is too late. Dependence is here, and has been since long before the iPhone 5.

I broke my phone in P.E the other day; I was at odds with myself for the rest of the afternoon. I had no option but to remain “unplugged”. But a new day comes and I adapt, because I am a human being, and human beings do that. I started listening to music on my laptop, and communicated by other means. I found peace in other places. And my parents found their information in other places.

Life as we live it is hard enough; there is no need to patronize people for taking the easier road. The human race will not grow weaker with the release of every new social network, IPhone, or album. We will not love our families any less every time we get as IOS update. We will not stop appreciating the beauty of the world every time a fifteen year old posts a selfie.

And you don’t get to decide what dependencies are harmful.